After being together for eleven years I’m now in the process of selling my first car.

As much as I’d like to have kept it forever and ever, life has a way of moving on. But, as I’ll mention later, that doesn’t mean you can’t keep the memories.

There was a badge on my first car that bore the legend ‘Independence’. Which is beautifully apt, as that’s what it gave me – a full sense of independence that I’d never had before. I could go anywhere that the roads could take me. 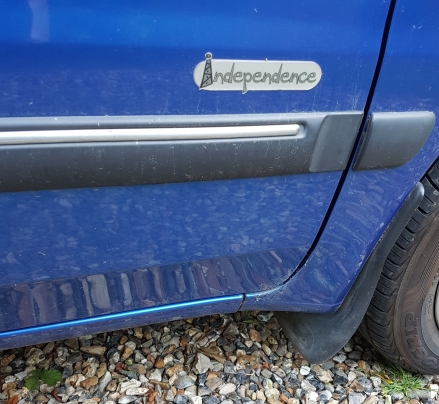 My first car wasn’t the best model out there, it wasn’t the fastest and it certainly wasn’t the biggest. But yet it was with me through many adventures, and I learnt a lot from it.

Don’t be afraid to take the reins…

My first car didn’t have power steering. To get that car to swerve in any direction it took a lot of wrenching…and parallel parking was always a problem.

(For those not in the know power steering basically makes it easier to steer your car. It’s like having an extra hand on your wheel – helping you ease off into the direction of your choice.)

But I learnt that sometimes you need to use a bit of brute force, sometimes you need to take problems and scenarios in life by the reins and give them a metaphorical wrench to get things going in the right direction. Sometimes we look over our shoulders too much for assistance, and it’s not going to always be there.

He was luckily enough to be given a car that was all bells and whistles. It had been top of the range just a couple of years ago and it even had a soft top…which made him look cool as hell as he cruised through the British summer of that year with his aviators on. My car was more than a couple of years old, much older and a lot more humble.

I went miles in my car – it got me from A to B with no fuss and no frills. I ran into my friend about a year later, and he’d downsized to a car a little like mine.

While his car looked awesome it wasn’t well made. There were constant problems, and parts for that car were expensive. It had cost him a couple of grand, and they’d lost a lot of money on it when they sold it. Whereas I’d spent £30 on a new wheel and £2 on an air freshener that was meant to smell like pineapple.

The glossy pages won’t tell you this, but sometimes you need to prioritise practicality over aesthetics.

Become emotionally attached to it

I fear that we underestimate nostalgia and sentimentality sometimes. No matter how long you have it for, you’ll always remember your first car. So think about it as a friend, rather than just a tool to get from A to B.

As you’ll probably know, whenever you talk to older people they’ll regale you with stories from their past. Sometimes the same story over and over again.

I used to get bored, but now I don’t…because I’ve figured out that the reason people retell stories is because they like telling them.

Who am I to rob someone of that pleasure?

Life is all about making memories. So make the most of sentimentality and nostalgia, attach mental value to things…who knows how many times you’ll revisit, retell and re-enjoy the past.

And, of course – always drive safe and take care of yourself. The most important asset you have to the world is you.