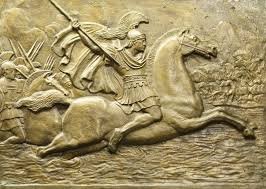 It was 4th century BCE and Alexander the Great had just arrived in the Persian Empire.

In one of the towns there lay an age old ox-cart, which was tied to a post with the tightest and most complicated knot that anyone could ever imagine.

Whoever was able to untie the knot and claim the ox-cart would become the ruler of the whole empire.

Things were easier in those days…

So. Alexander the Great and his most trusted aides arrived and were confronted by the knot.

They deliberated over it for hours.

The greatest minds of their time, yet none of them could work out how to untangle it.

…Alexander the Great whipped out his sword and chopped it in half.

Things aren’t always as complicated as they seem – whether they be creative or otherwise.

Sometimes you need to just chop that knot in half and move on!