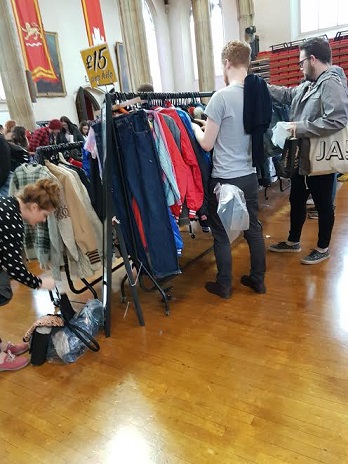 Today I didn’t write because I went to a vintage fair.

You know the ones I mean? Where a lorry full of veteran garments and  lovable rogues turns up at your local city hall – determined to separate you from your hard-earned monies.

This one in particular was a ‘weigh & pay’ – basically you’re given a rather unglamorous cellophane bag and you fill it with clothes. A kilo costs £15.

There’s a good sales angle with this – you get to a kilo way faster than you’d suspect, and the prices only inflate from there.

A lot of the track-tops for sale took me back to my P.E days. If only I’d have been an entrepreneur at school – on my last day I could have tip-toed into the ‘lost property’ cupboard and pillaged their stocks.

Let them sit for another ten years or so I’d have a fortune on my hands!

Let’s face it, we’d all like to make our mark on the world by creating something truly original – but, it’s hard to do that.

I mean, everything has been done before hasn’t it?

But, as creators, vintage fairs should give us hope.

These clothes, which were new once – and which were also old and out of fashion once, have a new lease of life and a new market to be sold to.

The organisers have found a new way to sell something old. And, as creatives, this is how we should look at things.

You remember that writer from years and years ago – Mark Twain? He said the following, and I think we all need to keep this in mind:

“There is no such thing as a new idea. It is impossible. We simply take a lot of old ideas and put them into a sort of mental kaleidoscope. We give them a turn and they make new and curious combinations. We keep on turning and making new combinations indefinitely; but they are the same old pieces of coloured glass that have been in use through all the ages.”

Take the movie “28 Days Later”. We’d all seen zombies before that. Those shuffling, decaying old things moving towards their prey with all the panache of a salt-ridden slug!

But then “28 Days Later” came along and we were introduced to fast-moving, rage-fuelled zombies.

These were something else! You couldn’t outrun them and you could barely outfight them. They’d smash your windows with all the force of a hurricane and they were smart-enough to find you afterwards. A locked bedroom door gave you little safety.

Thus audiences were interested again in a genre which hadn’t seen much originality since the 1960s/1970s when George A. Romero launched his “of the dead’ series.

It’s the same with business too. Look at Facebook – it wasn’t the first social media, was it? I can sure as hell remember using Myspace and bebo (for my sins) before that. Even one called ‘Facebox’, anyone give that a whirl back in the day?

Yet Facebook stood tall over them all. It captured our imaginations at a time when our lives were first saturated with the power of social media, and kept us in its thrall long after the competition had fallen in cyberhell.

Sure, it may not be as popular as it was once – but how often do you go a day without hearing the word ‘Facebook’ or ‘Facey B’ – depending on your social cricle.

I can recall a time when I’d use ‘Altavista’ or ‘Ask Jeeves’ as my preferred search engine of choice.

Fast forward ten years and I’m writing this blog post on ‘Google Chrome’ – can you remember the last time you used another search engine?

These ideas weren’t original, but that didn’t mean that they lacked the imagination and the drive to get to the top of the table.