I washed my hair this morning… (don’t worry this is going somewhere, this isn’t the pinnacle of oversharing on WordPress)

… I lathered, rinsed and repeated. Which is what we all do, right?

But the word ‘repeat’ was actually just added to the back of a bottle by an advertising executive, so that we’d all get through shampoo quicker.

Yet still, no matter how aware I am of this, I do it every time. Because it just feels right, and it’s been ingrained in my head since I was a nipper.

That one word ‘repeat’ massively increased shampoo sales, and still continues to.

The power of words in advertising, ladies & gents.

One of the best copywriting quotes I’ve ever heard comes from Winnie the Pooh:

“It is more fun to talk with someone who doesn’t use long, difficult words but rather short, easy words like “what about lunch?”

I think that’s also true for a lot of marketing content.

P.S Eeyore was always my favourite character in the stories, here’s a quote from him that still cracks me up to this day:

“Oh, Eeyore, you are wet!” said Piglet, feeling him.
Eeyore shook himself, and asked somebody to explain to Piglet what happened when you had been inside a river for quite a long time.”

Let’s say someone you know walks over to you sombrely and says:

“I’ve got some bad news”

No doubt you’ll get a sudden knot in your stomach and a hankering to know just what the news could be.

What’s the cause of that sudden anxiety?

Your first thought is naturally; “how will this affect me?”

Can’t help it. Can’t fight it. It’s human nature. Even if the news will only affect you by proxy that’s the first question your mind and body asks.

That’s why WIIFM is so important when trying to sell something.

That’s the most important question to answer – way before anything else, way before you even try to engage in a sale.

If you haven’t answered that in your sales call/article/advert/email then any conversions will be due to blind luck.

Unless you’ve been living under a rock on the farthest corner of Venus, you’ve probably heard about GDPR.

And, like me, your inbox has no doubt been flooded by companies you’ve forgotten about – asking you to remember them and let them into your life.

It’s perhaps the one time that everyone in marketing is sending the same email!

What it does provide though, is a good chance to see just how creative your favourite brands can be when tackling the same thing.

I know there are some subject lines I’ve seen that have stuck out in the battlefield of my inbox!

If we can apply creativity here, we can well and truly apply it anywhere…

I used to host a radio show several years ago.

Alongside a couple of friends/co-hosts I’d present a 2-3 hour program every week.

It was one of the most fun things I’ve ever done, and I still miss it today.

In real life I talk a little fast sometimes, and when I first started talking on air I was a little hard to understand.

But soon there was no stopping me – same with my co-hosts.

Presenting became easy for us, we didn’t even need to think about it – we just automatically began to adapt our speech so the listeners could follow.

We often used to have guests – musicians, local people of interest and even students who wanted some work experience.

After a while I began to notice that some of them struggled to talk to the mic. They’d stare at it intently and change the pitch of their voice as they tried to imagine this invisible audience that they were talking to.

It didn’t make for good radio.

So, after a few shows, I began to think to myself – how did I first overcome this problem?

Part of it was through practice, but the other part of it was due to me looking across at my co-host as I spoke.

So, rather than talking blindly into a mic, I was focusing and talking in a conversational tone to someone opposite me.

For me that was the key. Simply visualising someone and talking to them.

So I began to tell the guests to look at me as they spoke, rather than talking into the microphone.

Nerves ebbed away and confidence skyrocketed.

It’s the same with writing.

Wrap and direct your words at them.

Seems obvious, but time after time I read posts and articles that just don’t connect or flow.

Maybe even print off a picture of someone who looks like your audience demographic and blu-tac it to the wall in front of you.

I promise you tone and flow becomes easier when you’re looking at who you want to talk to. 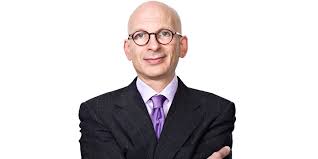 “In a crowded marketplace, fitting in is a failure. In a busy marketplace, not standing out is the same as being invisible.” – Seth Godin

By the way, if you’re looking to read one book before the end of the year make it Seth’s “Purple Cow”.

Somewhere along the Pacific north-west coast of North America lives a whale who has been given the name ’52 Hertz’ by the scientists who’ve been studying him for the last few years.

Whales, like many of us, spend their days looking for love. They market themselves to appeal to their perfect partner.

While we use Tinder and Grindr, they use a more traditional method. That of the mating call.

To attract a mate a whale will sing out in its distinctive tenor and then wait to see what happens.

Regular blue and fin whales sing at about 15 to 20 Hertz – whereas our friend, 52 Hertz, signs at a frequency of…52 Hertz.

This has made him something of a celebrity in the scientific world.

It’s a sad story though, due to his unusual voice, he hasn’t been able to attract anyone.

In a sea full of voices, his is too distinctive – it’s too out there and, as a result of this, no one can connect with it.

As storytellers and marketers we should keep the unfortunate ‘Hertz 52’ in our minds.

Because, while it’s good to be different, you should also make sure that you’re not too different.

Your audience needs to be able to resonate with you to a certain degree…or else you can’t hope to have a connection with them.

The sad thing for ‘Hertz 52’ is that he doesn’t seem to be able to change his unusual voice…but you can change yours. You can adapt your words and writing style for your audience – remember that!

It worked out for Bridge Jones in the end…so I’m sure that, one day, ‘Hertz 52’ will find his significant other.

When you were younger, did you ever watch the old ‘Tom & Jerry’ cartoons?

Or, any of those other old school cartoons from that time period?

If so, you may remember an old gag they used to do.

Usually it involved a newly born baby duckling (or baby bird in general) who would mistake one of the characters (usually Tom) for its mother.

It would then follow him round for the majority of the episode.

This harks back to a phenomenon that animal experts call ‘imprinting’. So, when a baby duck is born it usually sees its mother right away and then never forgets her.

However if the duck sees someone or something else first it can often think of it as its mother.

When it comes to branding, if you’re to tell your story and make it stick in your potential customers’ minds it’s worth thinking about your unique selling points.

Is your business a world first? Do you do something that’s never been done before?

How can you imprint yourself in someone’s mind to make sure you’re the first thing they think of?

Your answers to these questions could be marginally different to mine…but I bet that we’re very close.

Telling stories is all about being unique and, when you can be, being a world first.

“Good marketers see consumers as complete human beings with all the dimensions real people have.”